A garage apartment or suite can be the perfect dwelling for someone if they don’t mind the small space and living in close proximity to the people in the main residence.

However, a garage apartment can also bring you extra monthly income if you’re the one who owns it. If you have the space for it, building it could prove very beneficial to you as a homeowner.

In addition, a small bedroom would usually be about 100 square feet, so a garage apartment would be four of those small bedrooms grouped together.

How Much A Garage Apartment Costs To Build

If you’re interested in building a garage apartment to rent out, it helps to know how much this will cost.

Tim Shingly, chairman of the National Association of Home Builders’ Remodelers council tells The Wall Street Journal that his projects have ranged from $75,000 to $200,000, but it depends on the finishes.

Another site, this time Sapling, states that people in the U.S. spend roughly $26,000 to build a garage without an apartment.

When the apartment is included in the deal, the costs rise to approximately $70 per square foot for a home that’s separate from the main dwelling. So, you’re looking at between $18,000 and $47,000 for a garage home.

This cost would obviously include provision for things like electrical wiring, plumbing, and insulation. In fact, insulation is a common problem with garage apartments.

Since a garage is obviously meant for cars, turning one into an apartment means that there won’t be enough insulation for people to live in the space comfortably.

Therefore, the addition of insulation in the walls, ceilings, and floors will have to be considered during renovation.

It costs less to build an attached garage apartment.

If your garage apartment is “attached,” this means that the garage can be accessed from the primary residence.

The reason why attached garage apartments are cheaper to build is because they can make use of structures that are already in place due to the main residence, such as walls and electricity, as Angie’s List reports.

If you’re interested in the value to your home that building a garage suite can afford you, it’s worth knowing that it takes a decade to recoup the cost of building a garage apartment but it can be helpful to you if you want to sell your property in future because it adds an extra bedroom to the property and also approximately 10 percent of square footage, as The Wall Street Journal points out.

Extra Costs To Consider When Building A Garage Apartment

There are many other costs that crop up before, and during, the building process.

First, it’s important to know that you have to get a building permit for the garage apartment that you want to build. This can cost anywhere from $500 to $2,000.

In addition, you have to be sure that you’re allowed to build the garage apartment in the area in which you live – your apartment has to meet the area’s “zoning requirements.”

In other instances, garage apartments might not be allowed in your area due to issues such as dwelling uniformity and security, so it’s best to ask your local town hall about policies and limitations related to garage renovations in your neighborhood.

There are other expenses to bear in mind when building a garage apartment.

Since the addition to your home will increase the square footage of your primary residence, a garage apartment will increase how much property tax you’ll be expected to pay.

In addition, if you rent out the garage suite, you’ll have to claim the extra income on your taxes.

There are benefits to both attached and detached garage suites.

Can You Be Prohibited From Renting Out Your Garage Apartment?

You might not be allowed to rent out your garage apartment, but it really depends on where you live as the rules vary.

Some communities will allow garage apartments, or in-law apartments as they’re sometimes called, but they might have restrictions when it comes to who can live there.

For example, sometimes only relatives of the homeowner are allowed to live in a garage apartment, meaning that an outsider who’s not related to the family won’t be able to rent it out, as SFGate explains.

On a more positive note, some communities encourage garage apartments because they contribute to affordable housing in the area.

When you receive rental income from your garage suite, this not only benefits you as a homeowner but it’s a boon for the community too.

Some cities have been encouraging garage apartments to relieve the housing crisis.

For example, in 2017 California set a law that allows homeowners to convert garages into apartments, and they have been issuing many more permits for extra living units since then.

How Much Rental Income Can You Earn From A Garage Apartment?

If you’re allowed to build and rent out a garage apartment on your property, this can turn out to be a valuable extra stream of income for you on a monthly basis.

As The Nest points out, you can expect to net more than $800 per month from garage apartment rental income.

If you own a home that would look great with the addition of a garage apartment, you might wonder if it’s worth your money and if it will give you enough of a boost to your rental income as well as your home value.

You also need to consider the bigger picture, such as if your community will allow you to build a garage suite on your property.

This isn’t just about monetary gain, but also increased versatility.

If you don’t rent out your garage apartment, you could turn it into a living space for a family member, or make use of it in other ways, such as by transforming it into a man cave, games room, or home office. The options are endless.

Can you receive legal income from a garage apartment?

A garage apartment is referred to as an “accessory dwelling unit,” which means it’s a small dwelling on the same property as, or attached to, the main dwelling.

Garage apartments can provide the owner with a legal rental income, and that’s the case in many localities, as Accessory Dwellings states.

How much does a garage suite add to your home’s value?

A survey of more than 2,000 homes that was conducted by the National Association of Realtors found that 33 percent of home buyers would pay an extra $3,000 for a garage apartment on the property.

It’s definitely something that people see as valuable when purchasing a new home.

Since the age of six, I’ve been living in apartments. The transition was tough at first, but since then, I’ve come up with tons of ways to use smaller spaces and make them feel enormous. As a dog owner, husband, and soon-to-be father, I’m still finding more ways to make the most of smaller or awkwardly shaped spaces. What apartment doesn’t have its quirky features? They all do, but together, we’re going to put them to good use, one room at a time. 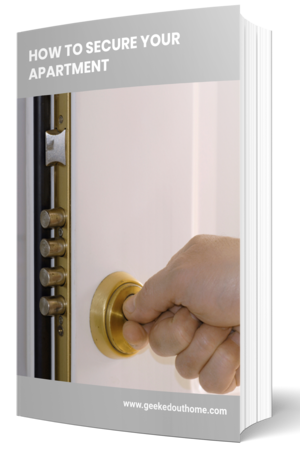 Download our FREE pdf guide and learn how to make your apartment safe.